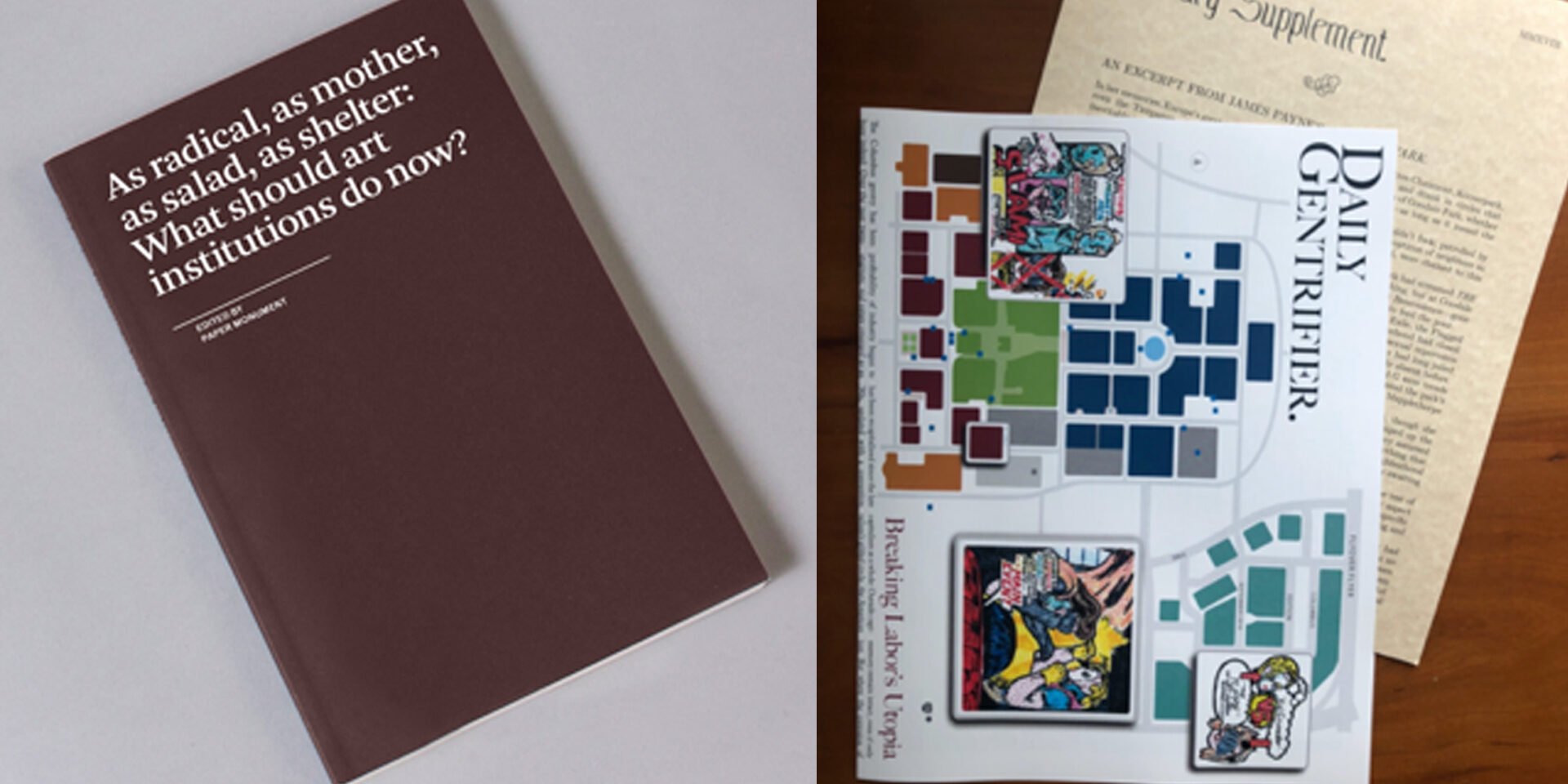 Dear / s,
We invite you to attend the lecture of Duško Petrović on Saturday, November 28, 2020, starting at 6 pm, which is organized as an accompanying program of the Autumn Exhibition, which this year is called “The Entangled”

Do we want to build an audience, or a public? How do we build a public?

Dushko Petrovich will discuss his most recent publications: As Radical, as Mother, as Salad, as Shelter: What Should Art Institutions Do Now? (2018) and The Daily Gentrifier‘s Flyover Flyers for Philadelphia and Columbus. Petrovich will place this work in the context of their respective series at his two imprints, Paper Monument and DME, in order to delineate his overall approach to larger questions in art publishing. Do we want to build an audience, or a public? How do we build a public?

Dushko Petrovich is a co-founder of Paper Monument, where he has published numerous critically acclaimed and bestselling books, including Draw It with Your Eyes Closed: The Art of the Art Assignment; Social Medium: Artists Writing 2000-2015; and As Radical, as Mother, as Salad, as Shelter: What Should Art Institutions Do Now? Petrovich has produced Adjunct Commuter Weekly and The Daily Gentrifier under his personal imprint, DME. He has written about art and visual culture for many publications including n+1, Bookforum, Art in America, ArtNews, and the New York Times. His work has been exhibited at galleries and museums nationally and internationally— including Zacheta National Gallery of Art in Warsaw, the DeCordova Musuem and the Institute of Contemporary Art in Boston, and Gallery 400 in Chicago—and has been reviewed in publications such as Artforum, artnet, The New Yorker, and the New York Times, among many others. Petrovich is on the Artistic Team for FRONT International 2022, the Cleveland Triennial for Contemporary Art, where he will oversee the publication program. Having previously taught at Boston University, Yale University, and the Rhode Island School of Design, Petrovich currently chairs the New Arts Journalism department at the School of the Art Institute of Chicago.

A workshop on poetry and resistance with Babi Badalov
11. September 2021.

INTERNATIONAL CONFERENCE “ANOTHER ARTWORLD: MANIFESTATIONS AND CONDITIONS OF EQUITY IN VISUAL ARTS”
27. November 2020.